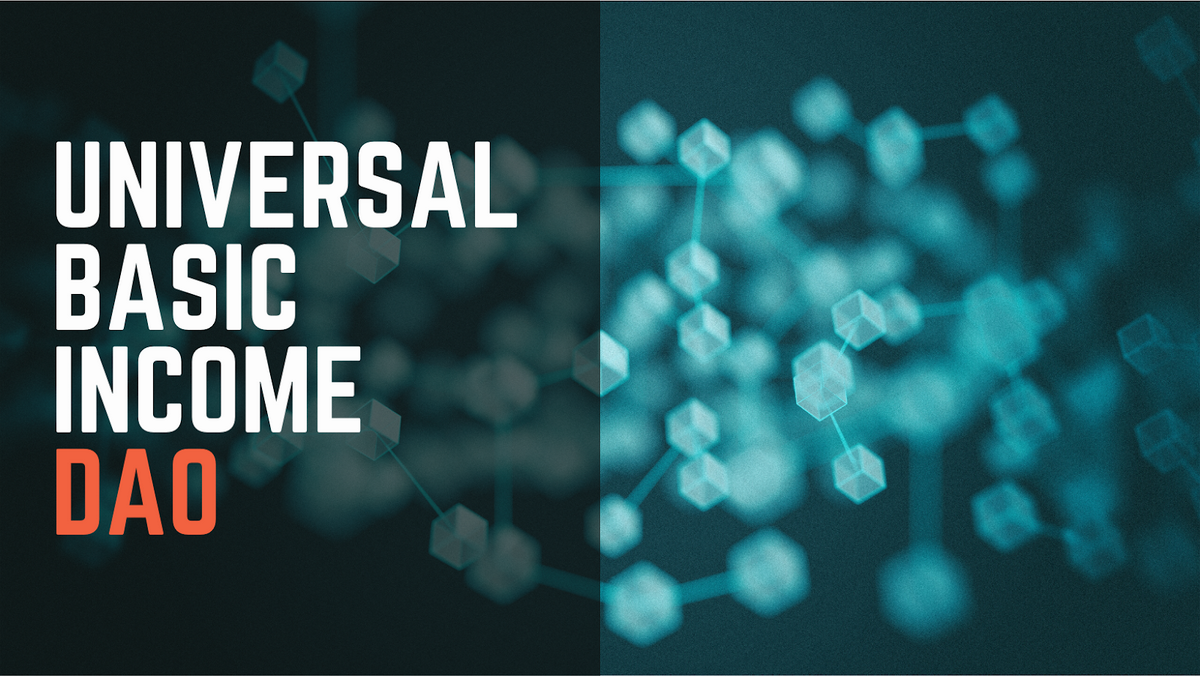 In the last few years, there has been a recent surge of interest about Decentralized Autonomous Organizations (DAO) on what has come to be known as the Web 3 space. The promise of DAOs point to a new social form and new/old ways for human coordination and organization to take place, using the informational infrastructure that Blockchains and Distributed Ledger Technologies (DLTs) more broadly provide as a backbone. DAOs point to ways to organize resources and human actions in distributed ways across current national borders to address different social, political and ecological problems. Recently, the Assange DAO campaign took place, creating one of the largest fundraising a DAO has done to date, in order to support the legal fees faced by Assange’s family and his legal team. As it’s a very nascent field, there’s a lot of ongoing experimentation regarding different governance structures, decision making rules and ways to distribute power in more transparent ways, beyond the current wealth inequalities that are present in the space. This combination of factors has paved the way for political movements to take up the way of the DAO and experiment further.

On the other hand, we have Universal Basic Income (UBI), the idea (and increasingly a practice) of just giving people money on an unconditional basis. Since the COVID-19 pandemic hit, there has been a massive surge of interest from policy, activist and academic circles alike, all pushing for UBI as an idea whose time has come. More concretely, different versions of basic income have been implemented to date, from research pilots, as was the case in Manitoba Canada in the 70s and the current basic income pilot by Give Directly in Kenya, to what some are calling basic income systems, which include the Gyeonggi basic income youth dividend started by governor turned presidential candidate Lee Jae Myung in South Korea, the second biggest basic income system to date, with over 170,000 people receiving the grant in the form of a local currency, to the digital currency of Mumbuca in Brazil, started by the Workers Party local administration in the city of Maricá, “the city of Utopias”, the Mumbuca Is issued by a local community bank as part of the city’s solidarity economy programs to over one third of the city’s population (about 70,000 people!). Then there’s the newly independent country of Barbados, which days after leaving the British monarchy announced that they would implement an unconditional basic income to all Barbadians. 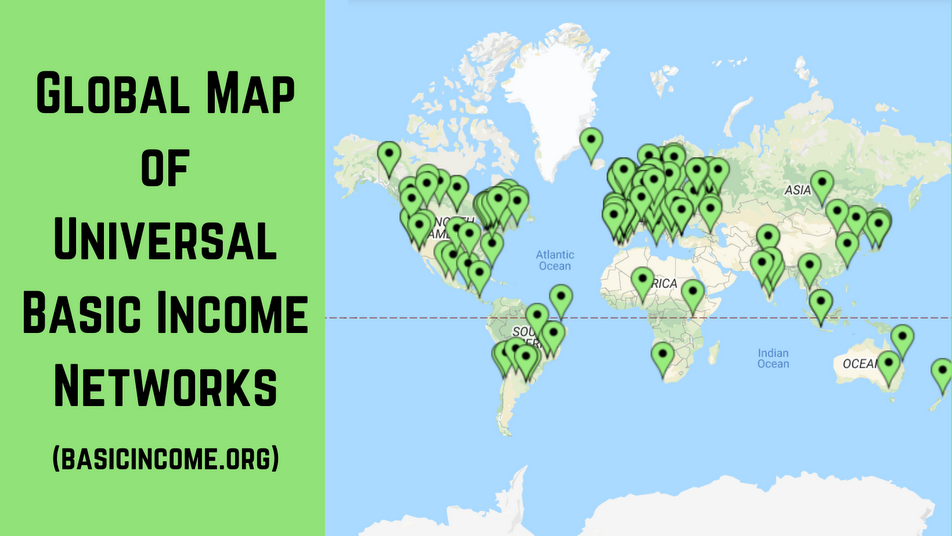 In the US similar experiences have taken place on a municipal and city wide level, with the Martin Luther King inspired Mayors for a Guaranteed Income, a network started by visionary Mayor Michael Tubbs in California, with now over 50 mayors joining and creating their own local basic income pilots so fast, it is hard to keep track of. From Pittsburgh to New York, this municipal movement took flight after the big push that Andrew Yang’s candidacy brought about, positioning UBI into the common sense of most US citizens. The brief lived Child Tax credit has politized the topic even more, having for a brief moment in time dramatically decreased child poverty in half. We’re still in the midst of the shockwaves of what’s to come. As the FED has proven again and again, there are no deficit constraints for the US government to keep issuing money. Yet, as in the case for the Child Tax credit, to whom that money is issued is the key question. Blockchains can set the stage for a new paradigm of monetary creation altogether.

Basic Income on the Blockchain:

Ever since Satoshi Nakamoto came up with the original Bitcoin white paper, the iconic Proof of Work (POW) algorithm and everything that came after that, there was always the undercurrent of UBI present in the space. Many people (including the author of this piece) went into what is now called crypto to do basic income, as blockchains provided the informational and monetary infrastructure in which to make it happen. Duniter (previously ucoin) in France was conceived as early as 12 years ago, whose community later developed its own version of POW* with its corresponding blockchain in order to create the G1, a universal dividend given to all people within its Web of Trust (WoT). Similarly, CirclesUBI emerged as one of the early great ideas within Ethereum with its emphasis on trust and radical take on one person one currency issuance mechanism, mixing ideas of mutual credit and demurrage with UBI. Since then, we have seen great attempts at doing UBI, from Proof of Humanity’s $ubi, which drips the token to all verified members with its own embedded court system via the Kleros protocol, to Good Dollar, eToro’s way of doing basic income through accrued interests on investments and trades within their platform, and finally, to less known but very interesting projects like Impact Market, a self-described poverty alleviation protocol, running on the Celo blockchain, they provide liquidity coming from donations to dedicated basic income projects in various Sub-Saharan African countries, for people to turn their crypto into local digital money through service providers like M-pesa.

While the conversation within crypto/open UBI space starts with basic income, a lot of these projects derive onto different conversations happening in parallel spaces, such as identity questions (how does the system “know” that a human is a human), holistic privacy (specially in the context of the war on cash and Central Banks pushing for a Central Bank Digital Currencies or CBDCs, for short), community currencies and questions around the nature of money and it’s creation, public goods funding and common pool resource management.

While ideologically different both in terms of their approaches to monetary design and in terms of the technological choices, all these projects share the same mission: bring basic income to the people. This, I would argue, is already the basis to create a common basic income earth DAO, a UBI DAO. 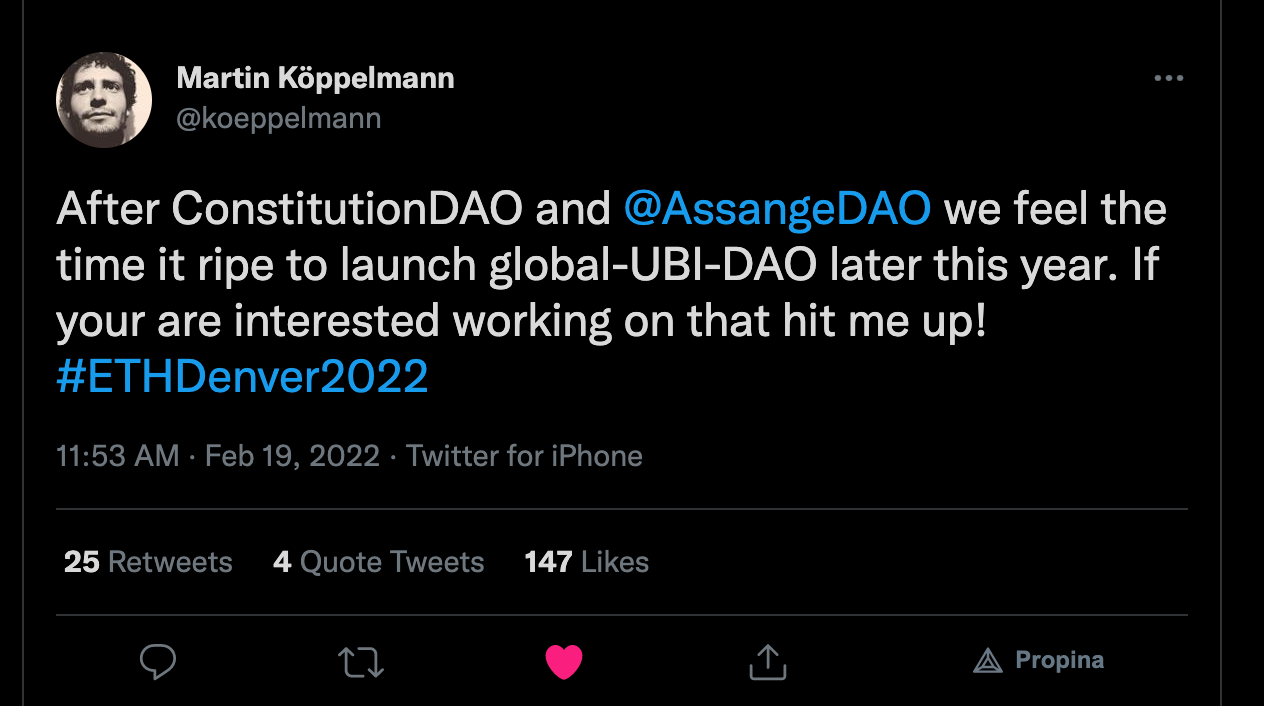 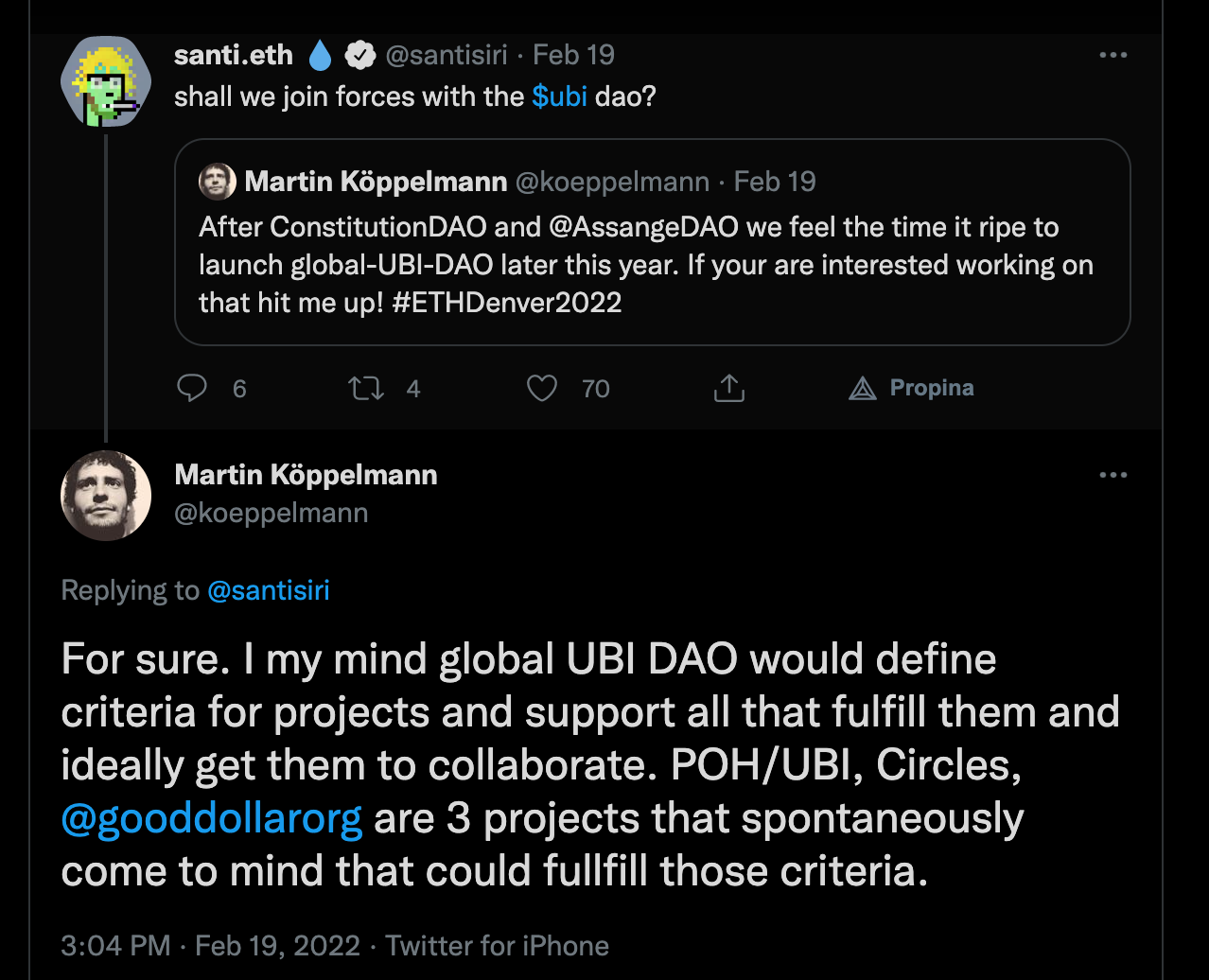 The idea of making a UBI DAO is not exactly new. There are already attempts pushed by the likes of Hilde Latour, current vice-chair of the Basic Income Earth Network, together with people from different UBI projects, including CirclesUBI and people from the PoH community, Encointer, Impact Market, and many other basic income practitioners from the global south and the crypto-commons movement.

Started during the pandemic, these attempts have been tailored at bringing together existing communities of practice and identifying what, among the now vast technological choices, fit different social contexts to implement basic income in practice (bring the money to the people!) as well as the different stakeholders involved at each level. This already provides a seed for what a planetary wide UBI DAO can be and do: create the grounds for basic income economies to come about.

A planet wide decentralized autonomous basic income organization could become a big catalyst for the UBI movement, bringing forth the necessary social and ecological transformation the climate crisis demands for our times. By combining the powers the scientific revolution blockchains brought about with UBI, we can create more local, democratic economies and regionalise the current wasteful global supply chains into more sustainable ones, where the stuff of people’s basic income can be sourced from the local producers and care providers, to counteract the monocultures of the day. 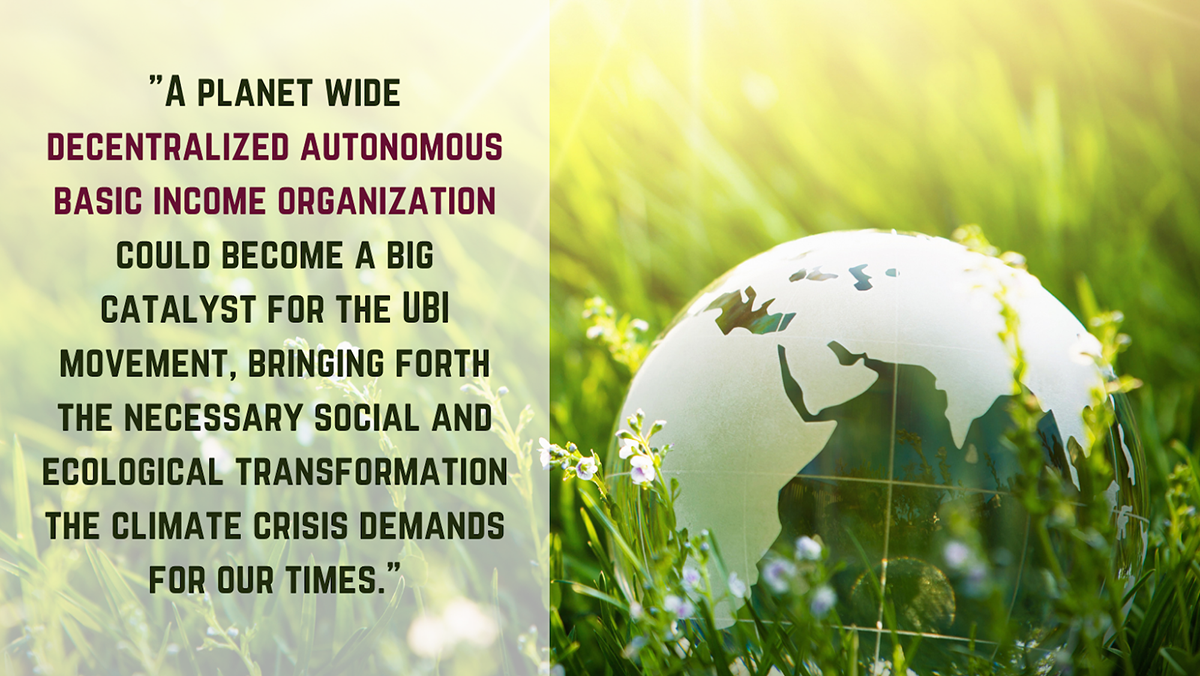 Again, this isn’t a far away dream. The Circles UBI Cooperative, established in Berlin in 2021, is currently running an open pilot to materialize this vision for a more local and democratic economy, connecting small farmers and food producers, supermarkets, cooperatives and delivery service providers in creating local economic rings through mutual credit obligations, to show that it is not just possible to do basic income within the heart of the EU, but that it can be reproducible everywhere. Similarly, people in Auroville, India, have been also experimenting with a ‘circular basic income’ currency. The Catalonian government recently announced a bold plan for a basic income pilot for the region, while activists in Chile are pushing to add basic income as a constitutional right in their new constitution.

A UBI DAO could connect and strengthen all these efforts, providing a framework for decision making to allocation of funds to particular municipal, city wide and even transnational systems that need the support. This also helps to democratize the blockchain infrastructures and knowledge inequalities which currently prevent critical adoption, allowing people to put the A in Autonomous forms of organization, so that they can create the common infrastructures which better suit their needs.

The roadmap for a planetary basic income begins on where each one of us is, connecting our tireless efforts through our common mission to bring about UBI into being. A planetary UBI DAO should define the criteria for different projects and support all the fulfill them.

We do not expect that there will only be 1 DAO to coordinate everything about UBI. On the contrary, we should start from the assumption of a plurality, since this is what we already have. Following the “Dao de Jing” of the Laozi , first there was the one, then two and then the myriad of complexity flowed through. By joining forces, we can begin experimenting with cooperating and mixing the existing systems, draw out best practices based on real experiences, create new ones and allow for funds to go to where they need to: support in the funding and creation of basic income systems worldwide. 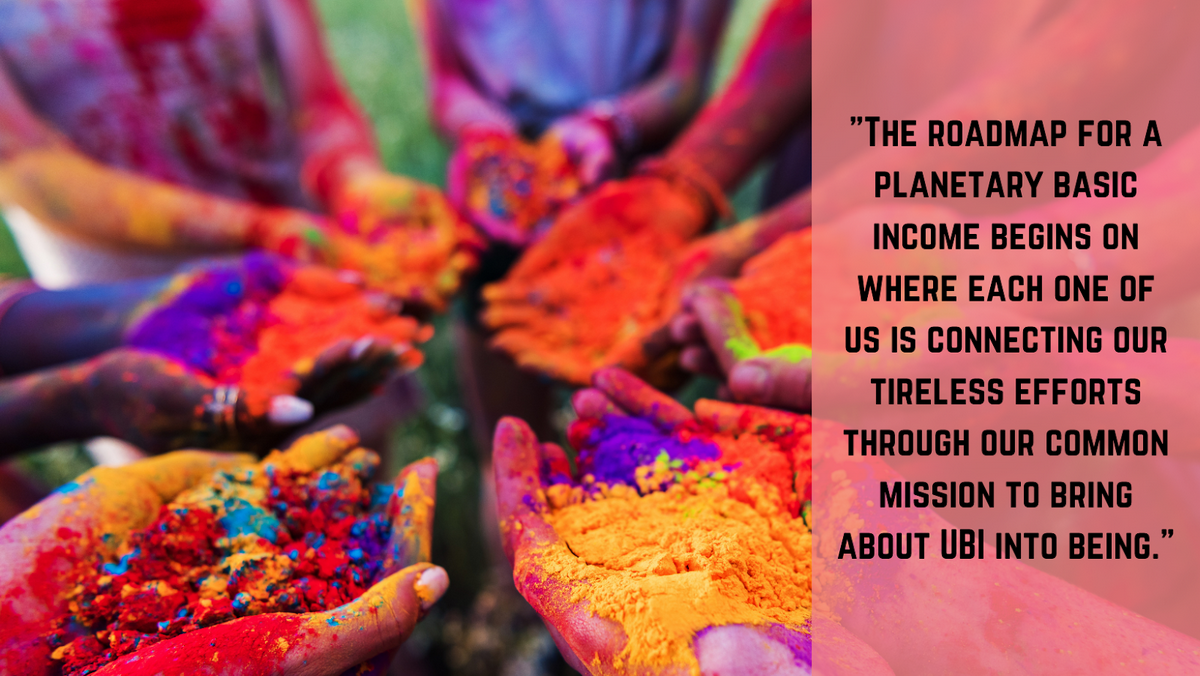 This isn’t a call to solve social and political problems with technical solutions, or techno-solutionism, but the total opposite: to embed technology with the values we wish to see in the world and use it to solve social problems with social solutions. The principles to organize ourselves should therefore follow at the very least the 8 principles of the Commons outlined now famously by Elinor Ostrom.

UBI is the social solution to begin addressing the social, political and ecological problems of our generation. UBI is only the beginning of the transition towards other worlds that are possible. We are only getting started. 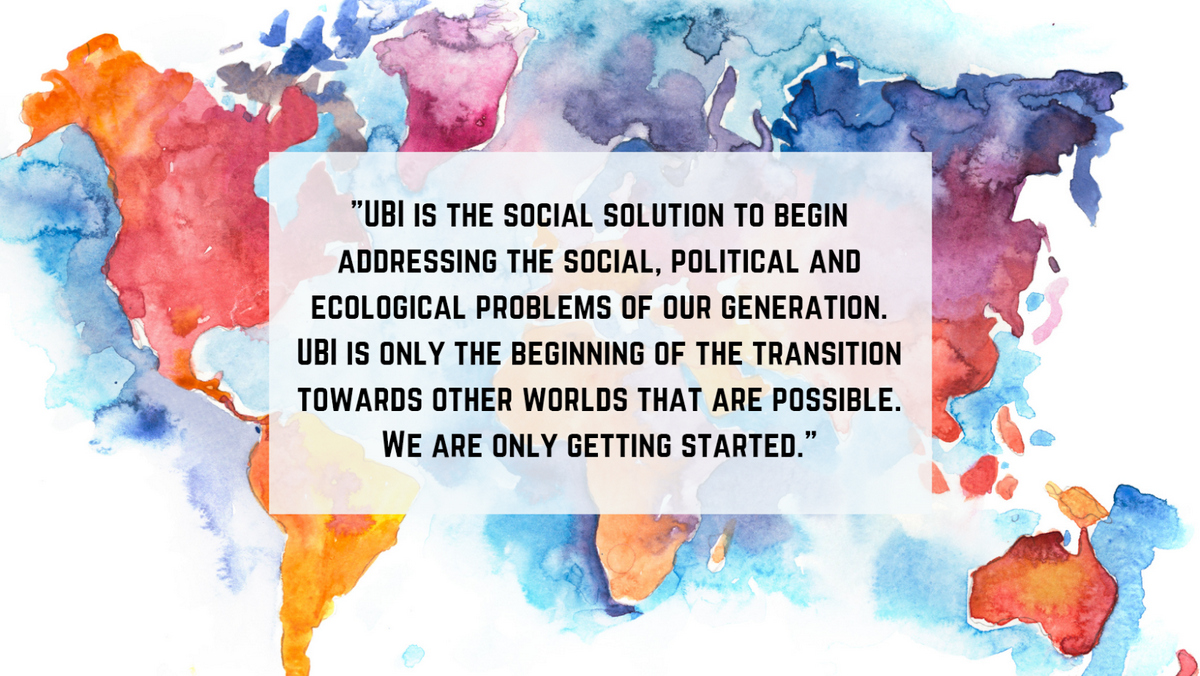 The proposition is therefore to begin with one DAO based on the (care) work already done by the UBI Alliance (now called UBI Blockchain Collective) and:

As the late David Graeber put it:

“The ultimate, hidden truth of the world is that it is something that we make, and we can just as easily make differently”.

If you want to be part of the UBI Alliance/UBI Blockchain collective please get in touch on the discord channel here and work together with us to plan the next steps. We are only getting started.

What are we waiting for?

-Julio Linares is an economic anthropologist, co-founder of the CirclesUBI project, currently serving as social outreach for the Basic Income Earth Network (BIEN).

Circles UBI is an alternative currency that works something like a basic income. We launched in Oct 2020. Read our whitepaper: https://handbook.joincircles.net/docs/developers/whitepaper Or find out more at: https://joincircles.net